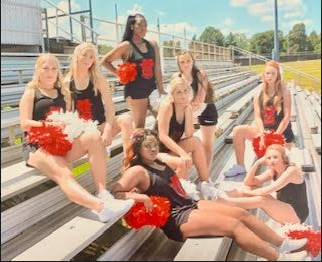 The coaching staff would like to say congratulations and best of luck in the future to our 8 Senior Cheerleaders for the 2019-2020 Season! We are very proud of their growth, accomplishments and their academic successes this year! You will be missed by many. Once a Cardinal Always a Cardinal. 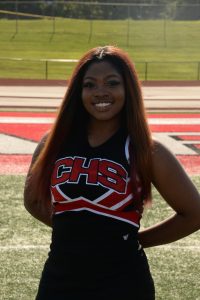 Shamya Andrews- Shamya is the daughter of Mr. and Mrs. Andrews. Being a Cardinals to her means Having ambition & spirit. Her hobbies include cheerleading and music. Upon graduation, Shamya plans to attend college to further her academics. Her favorite memory in high school was attending cheer camp. Her advice to future cheerleaders is the following, “Make good memories that will last forever”. In total, she has cheered 3 years for football season, 1 of which was at Colerain and 2 years of basketball at her previous school. She won the Positive attitude Award in high school. She was also awarded the Most Improved Colerain Cheerleader Award this year. 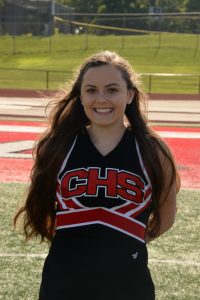 Kailey Kolbinsky- Kailey is the daughter of Matthew and Melissa Kolbinsky. Kailey describes what being a Cardinal means to her as “ including everyone and being kind to others”. Kailey enjoys cheering, hanging with friends, spending quality time with her family and Josh, as well as shopping, watching Netflix and more. Kailey’s future plans include attending college. Her favorite memory during senior year was being sung to by the freshman cheerleaders and the homecoming game. Her favorite cheer memory in high school was cheer camp sophomore year. Kailey has also been a scholar athlete at Colerain High School. Her advice to future cheerleaders is to “Try to include everyone on the team and get to know everyone” This year Kailey was honored with the Top Jumper Award for her amazing jumps! 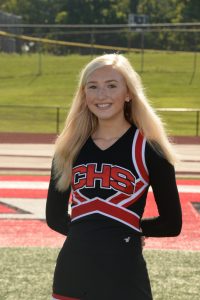 Jordan Klotz -Jordan is the daughter of Mike Klotz and Brandi Klotz. Jordan describes what being a Cardinal to her is. She quotes, “Being a Cardinal to me is being a role model to others, and being a part of such a strong community. “ Jordan enjoys cheerleading, hanging out with her friends and family, and watching Netflix. For her future, she plans on attending the University of Cincinnati Blue Ash, and majoring in Public Relations. Jordan’s favorite memory during senior year was attending UCA camp, and having such a great time making fun memories with her friends. Her favorite cheer memory overall in high school was going to state her junior year of cheerleading. Her advice to future cheerleaders is to “make the most of every year. Take it all in, and make great memories with your friends because you will cherish these moments for years upon years.” Jordan lists her awards as the following: The Academic Award for all 4 year, the All-American cheerleader award, the Pin it Forward Award, and the Athlete of the Week Award. Jordan is also received the All Around Best Cheerleader Award. 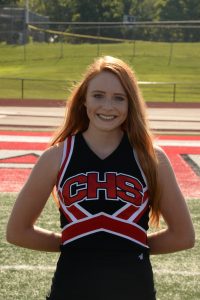 Lynsey Lipps – Lynsey is the daughter of Lisa and Dave Lipps. For Lynsey, being a Cardinal means being a team and representing your school. Her hobbies include cheerleading and in her free time she enjoys being with her family and friends. Her future plans include attending the Christ College of Nursing. Her favorite cheer memories were team dinners with the football players. Lynsey’s other favorite cheer memory was going to state her junior year. Her advice for future cheerleaders is to ,”Soak up every moment because it goes by too fast.” Her awards include earning the All American Cheerleader Award twice at UCA camp. Lynsey was also recognized with the Top Performer for Colerain Cheer Award. 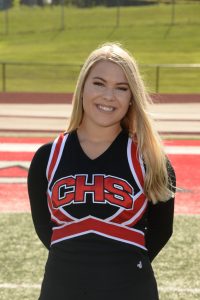 Lydia Leverett- Lydia is the daughter of Bob and Kathy Leverett. She describes what being a Cardinal means as the following:  “Being a strong individual putting forth all my effort to make myself a better person”. Besides cheerleading, Lydia includes singing as a hobby. For her future she says, “I would love to teach young children. And attend northern Kentucky university. Lydia’s favorite cheer memory is attending UCA cheer camp and doing the cotton eye joe at 2 am . Her advice to future cheerleaders is, “Always smile and think to yourself that everything will get better.” Her accomplishments and awards include All Squad MVP, Top Banana for the most spirited, The All American Cheerleader and Cheerleader of the Week. Finally, Lydia also earned the Top Choreographer of Colerain Cheer Award. 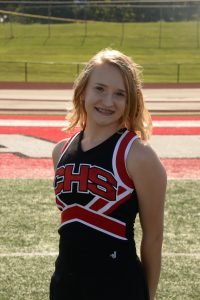 Karissa Lewis- Karissa is the daughter of Rachael Schmidt and sister of Veronica Lewis. Being a cardinal to Karissa means “Being a team member and making sacrifices for everyone so the team can become better as a whole”. Besides cheerleading, Karissa enjoys watching tv shows with her mom in her free time and her hobbies include going to eat with friends and just spending time with them. Karissa’s future plans include going to the University of Cincinnati for occupational therapy. Karissa has won  multiple jump competitions and tumbling awards during her high school cheer years. Her favorite memory during senior year was Senior Night. Her overall favorite memory in high school was her freshman year during camp. Karissa’s advice for future cheerleaders is the following,” Be patient and don’t argue, no matter as much you think someone might be wrong, just hear them out because you might learn something.” Karissa was also earned the Top Tumbler of Colerain Cheer Award. 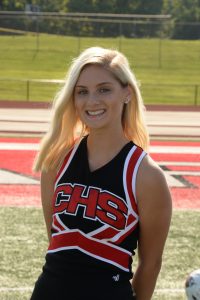 Bella Krueger -Bella is the daughter of Natalie and Kai Krueger. Being a Cardinal to Bella means always having a second family. Her hobbies include cheerleading, shopping, hanging out  with friends, and going to the movies. Her future plans include Attending the University of Kentucky to become a pediatrician. Her favorite cheer memory in high school was Senior Singing. Her advice to future cheerleaders is the following, “Cherish it while it’s here, because it’ll be over fast”. Bella has earned the All Academic GMC Award, and the Pin it Forward award. She has also earned the Most Spirited for Colerain Cheer Award. 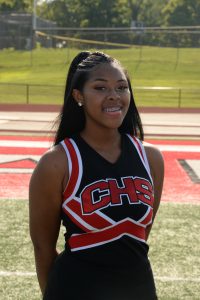 Jada Burgess -Jada is the daughter of Nicole Roberts and Eskar Burgess. Being a cardinal to Jada means the following, “working hard and working together as a community. It means trying your best and taking everything in, and making even the losses a win. Being a cardinal to me, means being a part of a family.” Besides cheerleading, Jada loves to sing, paint, and hang out with her best friend. After high school she plans to attend Tennessee State University to major in Nursing, and to become a nurse practitioner and Minor in music. Jada’s favorite cheer memory was going to UCA camp and getting closer with her team. Her favorite high school memories were being at every Friday night football game every year and going to state. Her advice to future cheerleaders is “Take it in, have fun, and make LOTS of memories! You’ll miss it when it’s over.” Jada accomplishments include winning 1st place in the I’ve Got Your Six Competition in Kentucky with the competition cheer team. Jada has also earned the Most Coachable Award for Colerain Cheer.

No Events This Week

Events are added by athletic staff.
View All Events