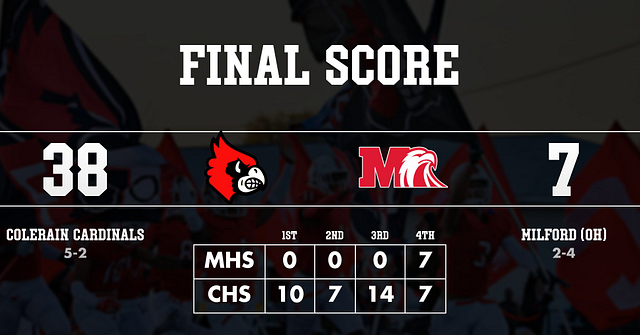 Colerain opened post-season play with a convincing 38-7 victory over the Milford Eagles.

Normally week 7 of any other season is just another matchup in the GMC gauntlet.  But not in 2020.  This year, week 7 represented the start of the playoffs.  Colerain finished the “regular” season 4-2 and was seeded 5th by a coaches vote and hosted the 12 seed Milford on Friday night October 9th in The Cage.

The Cardinals were without starting QB Tyler Prather due to injury but were fortunate to have last year’s starter for 13 games as his backup in Senior QB/RB/DB/PR Freddie Johnson.  The offense looks different when Freddie runs it, but his results under center speak for themselves as he is now 12-2 as a starter for the Cardinals.

The Cardinals won the toss and deferred to the 2nd half meaning the Eagles started off with the ball.  Milford was quick out of the gate with several quick passes that had the Cards defense on their heels.  The Eagles were able to drive the ball deep into Colerain territory before they went to the pass one time too many and Sr. DAVONTE KINER lept into the air and came down with an interception and the first turnover of the day for the Colerain defense.  The Cardinals took the field and drove down to the 17 yard line where the offense sputtered on the first three downs.  But the Cardinals would not be denied the first score of the game…

Cardinals get on the scoreboard first with the 34 yard field goal by Jadon Pechiney! 3-0 Cards 5:05 1Q pic.twitter.com/nJMpHbAMNr

The Cardinals would force a punt on the Eagles next possession and would put their second score of the 1st quarter on the board.  This one on the ground….

The second quarter saw a lot of back and forth between the teams.  However, the Cardinals ended up with the ball on the final drive and it was the Jr. MJ FLOWERS once again, with big-time help from his offensive line, put 6 more on the board for the Cardinals…

THAT is the textbook definition of a PUSH from an OL!

The second half started with Colerain getting the ball.  The first series of the second half started off rough as the Cards went 3 and out and had to punt the ball away.  A fired up coaching staff used it as a “coachable moment” to get their offense in gear.  After the defense stepped up once again, the Cardinals got the ball back and the Jr MJ FLOWERS once again did the damage for the Cardinals….

The extra point was good and the Cardinals were up 24-0.  The Eagles needed some spark to get their offense going but it was not meant to be their night.  The Cardinals defense was stifling all night and after stopping the Eagles on their own 25 yard line, it seemed they wanted to show the offense that they weren’t the only group on the field that could score….

WOW!!  Defense steps up with the unconventional score and puts another TD on the board for the Cardinals.  Now up 31-0 at the end of the 3rd quarter, things were looking good for Colerain to keep their state record-setting first round winning streak intact.  But as Lee Corso is famous for saying…”Not so fast!”.  The Eagles found Sr. WR VINCE RINGLAND on a quick slant pass just over 2 minutes into the 4th quarter.  He zigged and zagged his way through the Cardinal defense to put the first points on the board for his Eagles….

The Cardinals offense stepped up one more time and put their final score of the game on the board just four minutes later when Jr. MJ FLOWERS scored his fourth TD of the day to put the proverbial nail in the coffin…

The Cardinals Seniors were able to finish their Colerain football career with a win on the field they have spent four years on learning and loving the game of football.  The rest of the games will be on the road starting next Friday when they travel to their “Playoff Home away from Home” Dwire Field in Mason to battle GMC foe, the Mason Comets who also sit at 5-2 and beat Lebanon 34-16 in their playoff game Friday night.

Keep an eye on our Twitter @WeAreColerain home for updates early in the week to find out how you can catch next weeks action LIVE.